Okay, it’s been a shockingly long time since the last post, but I’ve been busy! When it comes to Sine Metu, a lot of things are going on: The mast is down and I am rebuilding it myself (i.e., replacing all stainless steel bolts, screws and clevis pins with titanium parts via Allied Titanium, removing those annoying mast steps above the spreaders, and dropping 20 pounds from on high); new rigging and a Profurl C290 furler are on the way; as are new sails from Ullman Sails; not to mention that the electric drive and lithium battery banks are finally complete; and new, aluminum spreaders are being fabricated by Island Nautical out of St. Petersburg, Florida; and I finished rebuilding both the lazarette and foredeck hatches…whew, I need a Jameson Gold just thinking about all of the plates I’m spinning in the air right now! And maybe another shot on spec!

More to come, I promise!

Mast is finally down! 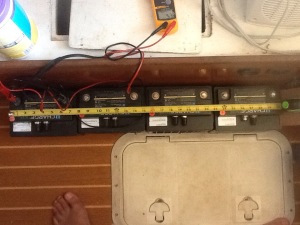 Orignal lower tang and spreader base.

Me and all of the old standing rigging.

Okay, I am going to keep updating this post instead of individual posts. Please excuse the dust.

February 20, 2016: rebuilt the mast’s winch and removed all of the chain plates. 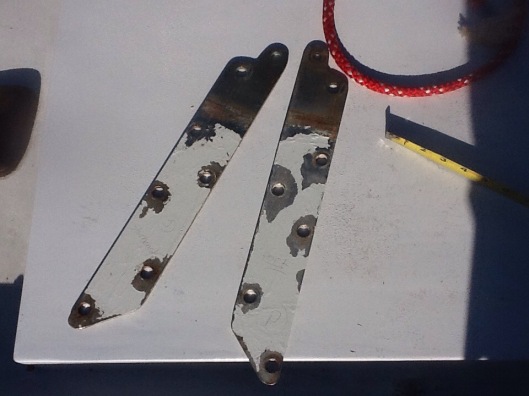 They actually look okay for being 53 years old, but upon closer inspection there’s a lot of corrosion that’s full of tiny pinholes — time for new ones! So, my homework assignment for tonight is to decide what I’m going to do; build them myself or hand them off to Harrison Marine on Shelter Island. To have them do would cost about $100-$125 each; to do it myself would cost $X and require the purchase of XYZ tools to fabricate it, oh and about three or four hours…

Tomorrow I hope to get the stem head removed — which is going to Harrison Marine to get rebuilt if possible, or used as a pattern for a new fabrication.

Sunday, February 28, 2016. My day at the boat is done! Got the spreader bases trimmed and measured (still need to grind them down a bit more, but my battery died) and cut the 3/8-inch G10 backing plate for the bow, now all I have to do is sand the area down a bit so that the epoxy bonds to the original fiberglass. It doesn’t need to be perfect as the epoxy’s main function is to mate up perfectly to the underside’s contours. When it hardens, it will act as a support, but the G10 will carry the loads. Now it’s time for a cigar and a whiskey as I contemplate the lack of visible progress, which I know only to be just that, visible. The chainplate mounts are my next G10 project, but for those I will be using the 1/4-inch thick stuff.

This sailboat still finds ways to amaze me. With frames exposed and 53-year old bolts and places removed it’s been nothing but gorgeous, solid wood down below. Damn, this is a solid little sailboat!

Next item to source and buy is a tri-color navigation light and the masthead will be complete. Aft, I will have the VHF/AIS antenna with a Davis windvane slipped over it, then the tri-color and forward will be the Maretron wind sensor.
APRIL’s update:

Well, it’s tax time once again, and I had to pay more than I thought was fair, but freedom isn’t free as they say…

All of the projects seem to be coming together without too many conflicts. The biggest change was the decision to omit the masthead navigation light. The first choice was to install a tricolor light, then simply an LED anchor light, but in the end to choice came down to the mantra of simplicity. With my unwillingness to move the Maretron WSO100 wind sensor, and its unyielding shadowing of any navigation light, I am opting to keep the nav lights on the bow, stern and just above the spreaders; this will help facilitate future maintenance. When anchored, I will simply raise an LED anchor light. Keeping the boat simple.

The rigging is also complete, both standing and running. Samson MLX halyards for the genoa, main, spinnaker and Solent stay, in addition to the topping lift/spare mainsail halyard. The heavier boom will be controlled by a Boom Kicker vang with an 8:1 pulley or low friction ring cascade — I have not decided on which one, yet. I’m getting good at making dyneema soft shackles so the LFR cascade sounds like a fun project.

I’m also adding lazy jacks to help control the new mainsail from Ullman sails. It will have two reefing points, cunningham, and it will also feature a 2+2 batten configuration: two, full-length upper battens and two lower, traditional, partial battens. The mainsail should enjoy its life as it will raise and lower almost effortlessly along the Tides Marine Strongtrack system.

So, with the new rigging will come new tools for me to control and adjust the mainsail: An outhaul, slab reefing, loaded vang and cunningham. Definite upgrades for a sailboat that I own, that’s for sure! I plan on only running the outhaul, cunningham and vang controls back to the cockpit and leaving the main sail and reefing controls at the mast.

This site uses Akismet to reduce spam. Learn how your comment data is processed.

Hopefully cutting the dock lines and heading Sou' by Sou'West!November 7, 2019
Setting sail for the Sea of Cortez! 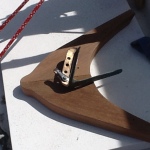 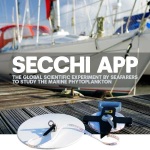