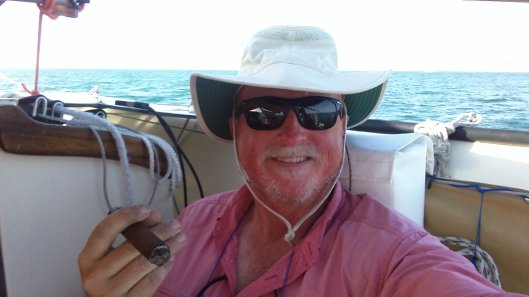 PredictWind forecasted sustained winds in the low 30s with gusts around 47 knots tonight. First, out of the south, which these Baja anchorages are totally exposed to, then shifting to the west for the brunt of the storm. From that direction, I’m in pretty good shape from waves and only the aforementioned 1/2 mile of fetch to fret about.

So, yeah, I’m ready. I’ll let you know tomorrow how it goes. But for now, I’m recharging all my batteries, both lithium and soul.

Both 110 watt SunPower solar panels are plugged into the Genasun MPPT boost charge controller to feed the 48v bank, which I drained trying to make the Punta Colonet anchorage. In hindsight, 50-amp hours is fine for maneuvering in a bay, but not for trying to make a passage when the morning winds die.

And I’m cleaning up the cabin, taking care of a few cuts and scrapes and wrapped up my right elbow, which is still bothering me. Instead of tennis elbow, I have tiller elbow.

My new tactic is to drop sails, strip down, take a sun shower, eat breakfast (already having coffee at that point), and tidy things up. You can see the wind filling in, usually between 1000 and 1030 hours everyday.

Anyway, I said “tried to anchor at the Punta Colonet anchorage,” so I should complete that statement. While I wasn’t able to to sail in due to lack of wind and tide/current, I was able to heave to for the night. I slept in the cockpit and set an alarm for every 15-minutes to keep an eye out for fishing boats. Only saw two, but well offshore from me.

That was Saturday night. Sunday I sailed to Isla Santo Martin and anchored at sunset. I made an early departure Monday morning to cover the short 10 mile sail to Bahia San Quintin, where I’m at now. While getting ready to raise anchor, the lobsterman cruised by and offered me a nice one for free. Unfortunately, I had to say no thank you as A) I was getting ready to leave, and B), it was just too damn big to eat in one sitting without getting sick. Oh well, Mexican courtesy lives on.

Another first for me, after I made the final turn towards where I wanted to drop the hook, the predicted windstorm arrived. With about 2 miles to go, I had to furl the jib (I needed the foredeck clear for anchoring) and reduced the main to the 2nd reef. It took me almost a half-hour to claw that remaining mile.

I’m getting really good at reefing!

Oh, one last tidbit. I had a great downwind, wing-on-wing sail with the new whisker pole setup. For about four hours, a couple of hours before and after sunset, I hauled ass down to Punta Colonet. Then the winds totally died. But I had a great time tearing through the darkness with the Simrad Tiller Pilot doing all of the steering while I kept the sails finely trimmed. 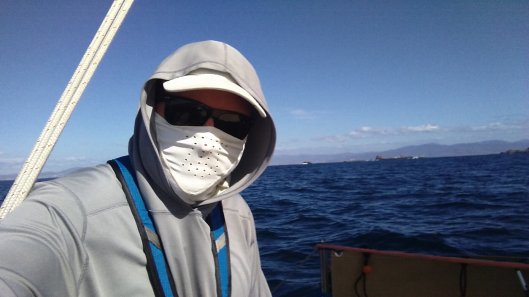 This site uses Akismet to reduce spam. Learn how your comment data is processed.

Hopefully cutting the dock lines and heading Sou' by Sou'West!November 7, 2019
Setting sail for the Sea of Cortez! 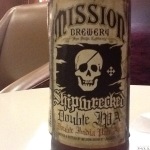